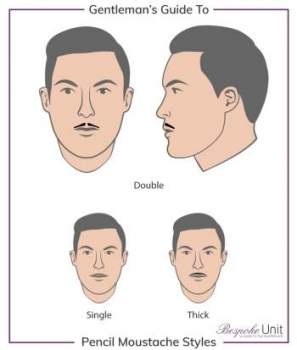 November is a time for many things, Thanksgiving, football, and of course mustaches. Known by many as “Movember” to raise awareness for prostate cancer, this is a month that men can give their razers a rest and let the facial hair grow. Of course mustaches take a little bit more care than the standard beard, which means trimming and taming, and in some cases styling. Check out a few of the top mustache styles we have noticed this November. How to trim a pencil thin mustache.

Made famous by John Waters, Little Richard, and Errol Flynn, the pencil thin mustache is a trend seen on many modern actors and men across North America this month. If you are a Movember man, this is a particularly easy style to create with little need for intense growth. Evenly trimmed and shaped into a straight line, anyone who can grow facial hair can achieve this look.

This is a pretty famous style in mustache history, worn by Tom Selleck and even fictional characters like one rather notable anchorman. This style of facial hair is thick and full, and making a comeback this November. Unlike the pencil mustache, this one will require some serious growth, but a little less trimming and shaping. Men with this beast beneath their noses tend to require a comb to keep things in order, but nothing says manly like the chevron.

Worn by cartoon villains for years, the handlebar mustache is a top contender for those looking to spice up their Movember facial hair. It also tends to be seen more frequently in 2015 by those who don the hipster styles, and goes well with a mustache and beard combo. The handlebar, true to its name, curls up at the ends in a bit of a twirl, causing one to think of the handles on a bicycle.

Not the classiest, but definitely a popular piece of facial hair, the stubble mustache appears after a day or two without shaving. Many men have been and will continue to be seen throughout the month of November sporting this do because they can. With no real maintenance required, and the ability to appear on even those who have the most difficulty growing a mustache, the stubble ‘stache will likely stick around into the winter months as well.

Appropriately named the horseshoe, but better known as the biker, this mustache resembles an upside down letter U, which begins under the nose and grows down to the chin. Some men grow thin beards near the base of the mustache, while others represent this style on its own. It may not be as popular as some of the above styles, but the horseshoe is certainly making an appearance this month. Perhaps best recognized as the mustache which Hulk Hogan used to wear, modern men are wearing this style thinner and much neater.

Very similar to the pencil mustache, the Zorro offers a slightly wider, but still very manicured strip of facial hair above the lip. The modern take on this is slightly less tailored, still thin, but not shaped into a perfect strip, but rather slightly longer in a devil may care fashion. This November we have seen plenty of modern Zorro’s hitting the street, with some even shaping their mustache’s into thin lined beards as well, for a full wrap effect.

No matter which mustache you choose to rock this November, be sure to groom it right. Crumb catchers, foam grabbers, and sauce keepers, when a mustache isn’t taken care of it can come off as more of a mess than a fashion statement. Choose wisely, and enjoy Movember.

There are no comments for this post "Top Mustache Styles For November - Blind Pig Barber Company". Be the first to comment...