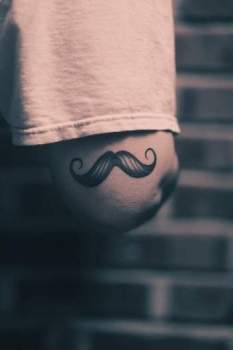 It is not common for a person of Mustached American heritage to grow up on two wheels, and I am indeed no exception. It all started at the tender age of three, when my estranged uncle Irving raised me to believe that attending the Sturgis Motorcycle Rally was the only way a boy could become a man. Sure, some might agree that he was clinically insane, dropping my virgin soul in a pit of tattoo-clad women, alcohol-and-heroin-induced gang members, and a sea of motorcycle gypsies. Unique mustaches.

Nevertheless, we went. We rode.

It wasn't so much the scene at Sturgis as it was the culture, ripe with sexually dynamic Mustached Americana. I saw a side of my uncle in all of those who went -- a unique character who would unknowingly ride in your blind spot while you're driving in heavy traffic. They didn't care much about anything beyond their rugged masculinity, elaborate mustache styles and canned meats. But something about their culture struck me.

My eyes ached of envy as I gazed at this machine like a starving dog. I knew what he would think if I asked to take it for a ride. "Sharing is fine if it's French fries, bad advice or the warmth of a fire. But with girlfriends, cigars and motorcycles, no."

But I couldn't help myself. I asked to ride and the response was something unexpected. He sat me down and put on the double A-sided single: Queen's "Bicycle Race."

Questions ran through my mind, like, "Why is a man that eats grits and entire pork shoulders for breakfast playing a song with references to religion, Watergate and Peter Pan?"

I've never told anyone this before, but I'd much rather ride a bicycle than a motorcycle, but I can't. I was born without a big toe on my right foot and could never get the hang of it. If it were up to me, I'd rather ride something I put in motion, not something that puts me in motion.

From that day forward, I dedicated myself to bicycle subculture. After all, I spent nearly 20 years on this planet involved with smokin' burnouts, hot girls and Suck Bang Blow. Plus, I was convinced that there's a lot more to life than being really, really ridiculously good-looking. It was time to focus on things like Critical Mass, mutant bicycle fabrication and bike-friendly social movements.

I joined the League of American Bicyclists, a movement to create safer roads, stronger communities and an all-around bicycle-friendly America. Not to mention I wanted to make biking to work the sexiest thing a person could do beyond growing a good-looking lower nose forestry unit.

I examined ways to create a more bike-friendly work environment, including the culture boom of biking to work, the benefits to employees and employers, additional resources for getting bike-friendly work initiatives off the ground and, of course, ways to make it ruggedly attractive. I even found an eBook called How to Create a Bike-Friendly Workplace from an organization called Upbeat Site Furnishings that helped me flesh out my thesis and focus on a grander design.

It's a good feeling to have evolved so far beyond my youthful days at the Sturgis Motorcycle Rally to supporting the nation's 57 million bicyclists and the 40 percent of Americans who choose to live a sexually dynamic Mustached American lifestyle. We've made much progress -- mustaches improve good looks by 38 percent according to the American Mustache Institute, and according to the Earth Policy Institute, there were some 535 bike-share programs around the world.

Now if I could only get Sturgis to hold a best in show for cycling.

There are no comments for this post "Cycling Inspiration, Sturgis and Mustaches, HuffPost". Be the first to comment...