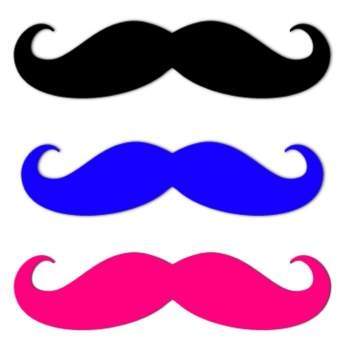 As November begins, many a man’s thoughts turn to facial hair. Millions all over the world consign the razor blades to the bathroom cupboard and attempt to grow a moustache for a very good cause. But moustaches come in many varieties, so whether you are barely capable of bumfluff or have designs on the soup-strainer, there will be something for you. Let’s have a look at moustache names! Moustaches.

A brief history of the word moustache

The first recorded instance of the word moustache in English, according to the Oxford English Dictionary (OED), is 1585, from a translation of a book (originally written in French) called Navigations, peregrinations and voyages, made into Turkie. It comes into English from French (which borrowed it from Italian), and is ultimately from the Greek word mustax.

How you spell it might well depend on which side of the Atlantic you reside. In present British use the unaltered French spelling moustache is almost universally used, but the form mustache, without the ‘o’, predominates in American usage. It might also have an impact on how you pronounce the word. In modern British English, the stress tends to be on the second syllable, whereas in the US, some people put the stress on the first syllable and some on the second.

8 words for moustaches, from burnside to walrus

There are several different styles to choose from for the intrepid Movemberer.

a moustache in combination with whiskers on the cheeks but no beard on the chin.

This elegant late 19th century number is named after General Ambrose Burnside (1824–81), an American army officer. (General Burnside also lent his name to sideburns – you can read the story of sideburns here.)

a long narrow mustache in which the ends taper and droop down to the chin.

This style dates from the mid 20th century, the kind of mustache worn by the eponymous Fu Manchu, a master criminal in the novels of British writer Sax Rohmer (1883–1959). A worthy goal to shoot for in Movember, but your best bet to achieve this one in the space of a month is to start with a full beard, and then shape it carefully.

a wide, thick moustache with the ends curving slightly upwards.

The origin of this term is easy to see – when done just right, the moustache resembles a pair of bicycle handlebars. Our current first record in the Oxford English Dictionary (OED) of this term is from 1926: “ John L.’s famous handle bar mustache… was ever a poem to the artistic eye of the barber.” (San Antonio (Texas) Light 5 Oct. 17/3). This, in the subjective writer’s view, is the Platonic ideal for all aspiring moustache-wearers. As impressive as it is high-maintenance, the handlebar moustache will ensure that you stand out from the crowd.

In reality, many of those who tackle the Movember challenge will achieve little more than this, the flimsiest of facial adornments. If mocked for your absence of luxuriant growth, try drawing yourself up to your full height (particularly effective when you are sitting down) and declaring loftily that you were aiming for a pencil moustache, actually, as worn by Vincent Price, or by Daniel Day-Lewis in A Room with a View.

a short bristly moustache trimmed to a rectangular shape.

Named after the dental implement of the same shape, this is a worthy moustache type for experienced Movemberers to achieve, and is not to be confused with the Hitler. The first OED record of toothbrush moustache dates back to 1904 – some 26 years before Hitler moustache is first recorded. The Hitler, a small square moustache like that worn by Adolf Hitler, is one that the more discerning Movember participant usually aims to avoid. If you are accused of sporting a Hitler moustache, reply simply, and with quiet dignity: “I think you’ll find that what is flourishing on my face is known as a toothbrush moustache”, and cite the OED entry dates. That should stump them. Plus, Charlie Chaplin had one!

A horseshoe moustache is a moustache in the form of a horseshoe, or arc larger than a semicircle. An admirable example of this appears on the countenance of Paul Sr of Orange County Choppers fame.

According to An illustrated dictionary of hairdressing and wigmaking (1966), cited in the OED, a Kaiser Moustache is “a moustache of which the ends are turned up in the manner of William II, Emperor of Germany, the Kaiser.”

According to the OED, this moustache is so called because of its resemblance to the whiskers of a walrus, and is currently first recorded in writing in 1918. Not a far cry from the soup-strainer, this moustache is best left to professionals, and is most effective in a shade of grey. A particular variety of this style is the Old Bill moustache, to denote a moustache resembling that of a cartoon character of the First World War (1914–18), an old grumbling Cockney soldier.

If this style is your aim, and you are starting from clean-shaven, you should aim to dazzle crowds for next year’s Movember. Go Mo Bros!

There are no comments for this post "A guide to words for moustaches, OxfordWords blog". Be the first to comment...