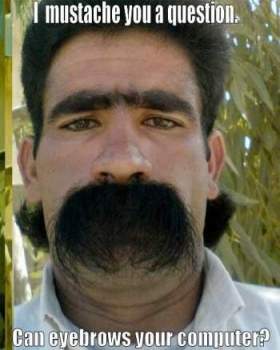 Once again the United States got opportunity to host the World Beard and Mustache Championships (WBMC). This year it was hosted by the Austin Facial Hair Club and took place in Austin, TX. We knew that it was an opportunity we could not pass up and made sure that we would go experience the WBMC, and represent Real Bearded Men. From our group we had me (Tima), Spikey Mike, William Walker, and JD that were able to attend the event. Biggest mustache.

I began my journey from NY heading out of JFK to arrive in Austin a few days prior to the competition. Spikey Mike met me there with Ben and Kevin from The Greater Hartford Beard and Mustache Club. It was the best greeting I could have asked for they were all holding signs for me wearing Wigs. That’s how I knew this was going to be a great time.

The first 2 days that we were there are mostly filled with Lone Star beer and tacos, two things I definitely recommend in Texas. The day before the competition itself we went to pre-register for the event to make sure that everyone is sorted into their proper category. In total we had 26 Categories, including categories for the Whiskerinas for the first time ever, which we will get into later. After this we also attended a pre-party as well. This was a great way for people to meet each other at the event.

The WBMC takes place every 2 years and is always hosted by a different country then the previous year. For example in 2019 the WBMC will take place in Antwerp, Belgium and in 2021 it will take place in New Zealand. Because it is such a large event it take place on 3 consecutive days and is kind of like a festival in some ways. Also this year there were more contestants than any other year. More than 700 people competed. And the greatest part of it all is that the entire event is done to give charity, which is a major part of the entire Beard Culture.

The first day was of the WBMC was spectacular to say the least. This was the first time most people really got to see everyone who would be in attendance. Being a bearded brother myself it was amazing to see how many of the best beards in the world I was surrounded by. Everywhere you turn you see a legend in the beard world. Finally let’s get to the categories that would be going up on stage. This was the day for the Mustache Categories as well as the fake beards. The fake beard category is made for those who may not have beards but would like to compete with their creativity. This is the first time this category was ever used in WBMC and was made possible by the AFHC, and of course by the Whiskerinas who competed in it.

First up to get on stage where the Mustache Categories. These ranged from different styled Mustaches to one that is all natural. A styled Mustache is one that someone would add an aid (a product of some sort) in order to get a desired look. There is even a freestyle mustache category where you can make your own creation with your mustache. Mustaches were all different sizes and styles but they were all awesome. It even inspired me to style my mustache for the day, totally worth it. If you are interested in a detailed list of Mustache categories you can reference the WBMC website which has a link below.

Next up to go were the Whiskerinas. Whiskerinas as per their Facebook page “We are USA's Ladies' Fake Beard & Mustache Society! Yes, we are women that create fake beards and mustaches & compete in them for charity.” In essence they the ladies of the beard world who finally got their time to shine in the 2017 WBMC. Above is an Image of Amy Roberts who won in the Creative Mustache category. She also gave me nick name "TMI" so if you call me TMI, I will either know you read this article or you met me at world's. From this image you can get an idea of how truly great these are for making different beards and mustaches. Many of these creations you see here take a lot of hard work and preparation. These ladies play did a magnificent job and put on an amazing show!!!

After a bit of after partying which of course included more beer and tacos we had to get ready for the next day. Day 2 of the competition is going to be for Partial Beard and Full beard categories. This is the part of the competition where you would see beards at their full natural potential. Some of the biggest beards in the world are all competing against each other in this category including previous world champions. Full beards get broken up into categories based on length so everyone has an even chance. Also there is one category for Full Beard styled mustache which people with different sized beards can compete in. The partial beards is where you are going to see awesome Goatees and chops in their respective categories.

To start of the day we had the partial beards get on stage. Everyone looks like they are the most interesting character in their own movie. You really get to appreciate how people have curated different looks for their facial hair. Some of these contenders have been growing it like this and competing for a long time and shows how your facial hair can grow in many forms. If you aren’t ready to grow a full beard and want to do something fun you should definitely look to these guys for some inspiration!!!

Next up to go where the full beards. This is actually the part I myself got to participate in. In addition William Walker was also going on Stage to represent Real Bearded Men. I competed in the biggest category in the history of Beard competitions. There was over 100 people in my category which was Full Natural 15-30cm. William competed in the next category up which was 30-45cm and then the category for all the biggest beard which was 45cm and larger.

I unfortunately did not win anything however it was a blast going up on stage and sharing it with so many amazing beards. It was amazing to see how many different types of beards there are. Some people have straight her and others have a more coarse beard like mine. In addition there are so many different color combinations you see from different beards from all over the world. You really get to see this to its maximum potential for these categories. It’s also inspiring to see some of the longest beards because it gives you motivation and inspiration on how your beard can become.

At this point it’s nearing the end. We only have one day left and it will be the grand finally. On the last day they save the best for last. This is the day where we see all the freestyle categories. Out of our competitors from Real Bearded Men Spikey Mike was competing this day in the Partial Beard Freestyle Category. In these categories people use various different products to shape and mold their beards into perfect creations. Freestyle Beards will range from cheeks to full beard and all have different unique looks. This is the part when it’s like “Did you see what that guy did to his beard” but every beard on stage is that guy and it almost looks like there are a bunch of super hero’s around. It is beyond impressive how perfect these beards come out and how much time and dedication it takes into producing the end result.

For Real Bearded Men this ended up being an Epic day. It turns out that our very own Spikey Mike took home 3

place for the Freestyle Partial Beard Category. Spikey Mike is sponsored by Real Bearded Men but is also a proud member of the Western Mass Whisker Society. He did an amazing performance as Silent bob, and did an Epic freestyle including his signature move where he spikes his beard through his ears. Not only did he take home the win but he also did it on his Birthday. Congratulations Spikey!!!!

After everyone was given their awards and the final pictures where all taken, it was sadly time to leave the event. However we will forever have the memories we shared together as well as the new friendships we have formed. All I can say is that I am looking forward for the next WBMC and recommend that anyone who can make it there makes the trip. It was awesome to meet my bearded brothers from all over the world, including people I have spoken to before and people that I have just met. This event really shows me how the beard culture has grown and will continue to grow and make a positive impact in the word. Also I would like to give a huge shout out to the Austin Facial Hair Club for hosting the event and doing an amazing job for everyone in the beard community

There are no comments for this post "Real Bearded Men at The 2017 World Beard And Mustache Championships". Be the first to comment...