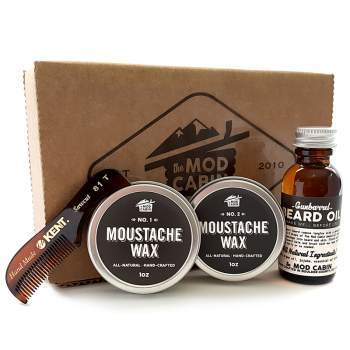 Many people might think “beard and mustache wax” was a product sold in the 1800s, conjuring up images of old presidents and barbershop quartets.

In truth, most fierce beards and mustaches (also spelled Moustache) which signify today’s “manly man” look wouldn’t seem truly manly without a little help. Wax specially formulated for the beard and mustache can stop a full, bushy beard from turning into lots of cute little curls.

Here’s a look at the top 6 best beard and mustache wax options on the market, with a few tips on how to use the wax to best display your manliness.

Why Use Beard and Mustache Wax?

Growing a beard and mustache can be both euphoric and horrific. The euphoria comes as facial hair starts to blossom noticeably and turn into a real mustache and beard. But that euphoria can quickly turn to horror as you realize that your facial hair is growing faster in some areas than others – and perhaps not at all in a few spots.

To help through this phase you probably need a beard trimmer in your grooming kit. There’s an interim stage where everything just looks messy because your hair isn’t long enough to style. Finally, the beard and mustache grow in, to the point where you can start to tame them through the use of balms or waxes.

There are two primary reasons to wax a mustache

The first is practical: it keeps mustache hair out of your mouth so you can speak, eat, kiss and do whatever else you need to do with those lips hiding underneath the hair.

Second, it’s an attractive look when you style the mustache to give it a slightly glossy, controlled look; you can even grow handlebars if you wish. Obviously, mustache wax is designed to provide a firm hold on hair, because the skin around the mouth moves quite a bit when you smile, speak, frown, yell and chew. Keeping the mustache hair in place can be a challenge, so you need a wax which is going to provide a very solid hold.

How to Use Beard and Mustache Wax

Using mustache wax is actually very simple. First, open the tin and run your fingernail across the wax to pull up a very small amount. Now rub it between your hands until it is pliable. Apply the wax to the center of your ‘stache and start working it toward the end using a comb.

If you have problems, it’s usually because you are using too much wax. Start with a tiny amount and add more, a little at a time, until you find the perfect amount for your mustache.

Beard waxes perform a different task than their mustache brethren. If you used mustache wax on your beard, it would end up looking something like the one on Travelocity’s traveling gnome – probably not what you had in mind when you decided to grow a beard.

A good beard wax should act more like a conditioner, taming the wild curls and random growth of your facial hair. That’s accomplished by warming the wax in your hands and then running your hands from your cheeks down to the lowest point of the beard. Repeat this procedure a few times, and even the unruliest of beard hair should be turned into a flowing masterpiece.

Produced in Portland, Maine, Stache Bomb Stache Wax is one of those products you just have to love because it was created by a man sick of inferior products. Jamin Badger grew out his mustache to combat the cold Maine winter of 2010, only to find that available mustache waxes didn’t do the job.

Like any enterprising American, Badger decided to make his own homemade mustache wax, and the rest is history.

Stache Bomb Stache Wax is made primarily of soft beeswax, with an underlying pine scent which many describe as citrusy. Stache Bomb is softer than most waxes on the market; it will keep mustache hairs out of your mouth and in place, but without the “caked” texture so many other waxes seem to provide.

Even though Stache Bomb has only been on the market since 2011, it has quickly become one of the most popular products of its kind, because it gives a well-groomed mustache a completely natural look. This product is so versatile you can even use it on your sideburns and beard.

The Amish are known for many things, including their epic beards. Frankly, they’ve forgotten more about beard care than most of us will ever know.

Honest Amish Original Beard Wax was first sold in the 1970s as an effective way to “wax out the wildness” in a man’s beard. The fact the product is still popular 45 years later should tell you that the quality and effectiveness of this beard wax are top-notch.

Every tin of Honest Amish Beard Wax is made by hand, even after all this time. The ingredients are based on a proprietary combination of ingredients including organic oils, fruit oils, nut oil, butters and beeswax harvested in Pennsylvania Amish communities.

All ingredients are certified as natural and organic – just what you would expect from a people whose life is largely devoted to natural farming.

Note: Honest Amish also has a great Beard Balm. Beard Balm is great for those men who are looking to soften their beard hair, eliminate itchiness and even to get rid of beardruff – see link below.

Mountaineer Brand Mustache Wax is produced in West Virginia, a state where many mountain men have mighty impressive facial hair.

This product is a firmer mustache wax than the Stache Bomb; if your mustache is exposed to extreme elements during activities like riding a motorcycle or you live in an environment with high humidity, a firmer wax is necessary to keep your hair under control.

Mountaineer is a lesser-known brand, but it makes our top 6 best mustache wax list for a unique reason. It’s made from a beeswax base like many other products but does not have the off-yellow appearance of almost every other mustache wax on the market.

It is nearly clear in color, thanks to a proprietary oil mixture. This is particularly important for men with blonde or ginger mustaches.

Although the makers have given this product the “gloss” moniker, Professor Fuzzworthy’s Beard Care Gloss and Conditioner is really a softer form of beard wax because of its beeswax base.

The wax comes from a single species of plant which grows in Tasmania, and it is then mixed with a number of oils including jojoba, castor and olive to create an impressive beard treatment.

Professor Fuzzworthy’s does not “cement” your beard as a classic wax product does; instead, it achieves the goal of controlling facial hair through a thorough conditioning process. As a bonus, this product relieves the itchy sensation many feel when growing out their beard for the first time.

A wonderful thing about many beard and mustache waxes is that they are made not by large, faceless corporate conglomerates, but are homemade mustache wax (or beard wax) produced by face hair enthusiasts.

That’s the case with Firehouse Mustache Wax. John Pitts, a Mississippi fireman and farmer, produces these waxes at the international headquarters of Firehouse Moustache Wax – his cabin.

Pitts found himself in the mustache wax business because the company making his favorite brand went out of business, and he needed a very firm mustache wax recipe to handle the humidity and heat of Mississippi. Poof – Firehouse Mustache Wax was born.

As you might imagine, Pitts designed this wax to be very stiff so that it can handle just about any conditions. Whether you’re facing Equator-like heat or August humidity in Miami, this wax will not falter: no drooping, no running.

Yes, it’s really spelled that way: “CanYouHandlebar,” but don’t let the cuteness put you off. The company’s Primary Wax is designed to hold mustache hairs in place for a full day in all but the hottest and most humid climates.

This wax not only styles mustache hairs, but also helps keep them healthy through the inclusion of vitamin E, shea butter and other ingredients. This is a homemade mustache wax, with each batch made by hand from locally-sourced beeswax in Michigan.

There are two other products which just missed out on our top 6 list: Clubman Mustache Wax, which is made from beeswax, coconut oil and other ingredients and is excellent for training brand-new facial hair; and Fisticuffs Mustache Wax, a beeswax product which performs well but can feel a bit greasy, due to the addition of ingredients like jojoba oil, coconut oil and raw petroleum jelly to its mustache wax recipe.

Robust beards and killer mustaches look great, but only if they don’t look like sagebrush blowing in the wind. Any of these products can help you tame that facial hair, and truly look like a man’s man.

There are no comments for this post "Top 6 Best Beard Wax and Mustache Wax Products for Men - Aug. 2018 (User Guide)". Be the first to comment...