Man with big mustache. The man bun hairstyle and hipster beards in the heavy metal scene? 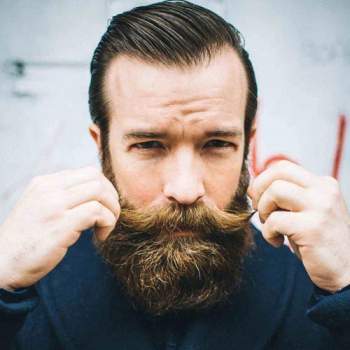 The other day I was in Seattle for a heavy metal festival that i was all excited about going. My friend Nate invited me over for 10 days to stay at his place in Seattle and seeing how chap the plane tickets were I said, to hell with it, and next I knew it I was on the plane to Seattle. We decided to go to one of the heavy metal festivals, pretty underground and with upcoming bands like The Skullcrushers, The Fisting Kings and a couple of others. Lots of moshing and drinking beer, that's how we dig it and that's how we like it. Hairstyle with mustache.

Along come the man bun hairstyles and the hipster beards

So the point of this post is not to tell you how much of a good time I had at the the festival getting drunk off my ass and trying some of that weed they've got up there in Seattle (damn they got some good stuff). Nah, I'm here to tell you about this stupid new hairstyle trend called the man bun.

As you will know long hair in men is very common in the heavy metal scene. You will see dudes who grow their hair to their freaking ankles. It's all good. What you won't see or what you would not have sen until recently is guys with buns on their head to tie their long hair. So the man bun is a new mens hairstyle trend that was started by hipsters who grew tired of their undercut hairstyles and their slicked back hair, at least according to pundits. The next hairstyle idea that these idiots, I mean, hipsters had to keep their trendiness was to grow their hair long for a year and then put their hair in a bun on top of their heads. The trend is so widespread that we nowadays even have man bun hairstyle websites with man bun tutorials and telling you what hair products to use for the man bun hairstyle so come on, I dare you to look at that fucking list of hair products those guys recommend for their "pretty" man buns. Now, had the manbun trend stayed in the hipster scene, we'd all be happy, but it had to spread on to the heavy metal scene. Since most heavy metal guys have long hair away, the step to a man bun was as simply as buying a hair band and putting their hair into a man bun.

You know, those of us in the heavy metal scene have taking great pride in not succumbing to fashion trends and hairstyle trends. I'm talking on behalf of both guys and girls. Just like us heavy metal dudes hadn't jumped into the stupid hairstyle trend of the undercut hairstyle, our heavy metal girls had and have completely avoided all those attention whore hairstyles of the likes of Miley Cyrus, Rihanna and Madonna, or whoever the fuck is in the latest fashion news. It was either long hair for guys, preferably messy, and it was even longer hair for girls, perhaps with some razor haircut on the side of the head, similar to that Skrillex haircut, only that that Skrillex clown copied the hairstyle from the heavy metal scene in San Francisco back when the kid was playing electro pop shit with his band.

I have to say that seeing so many man bun hairstyles at a heavy metal gig was gross. I don't think that I can find any other word to describe how I felt when I saw dudes wearing Metallica t-shirts and a "cute" man bun with those chopsticks inside. Funnily enough, those dudes with the man buns were the ones who would not dare to enter the mosh pit, and it was just us, the long haired dudes who don't give a fuck, moshing like beasts. Good times. One thing that we should remember is that Seattle is a hipster city. I don't know how thy do it, they must add some kind of estrogen shit to their water. I didn't know this but Nate confirmed it and even warned me that we would be seeing dudes with man bun styles and handlebar mustaches at the festival. Lo and behold, we fucking did!

My take on this and from what I saw is that it's just the posers that have entered the heavy metal scene to make it trendy to be "alternative" and to listen to stuff that mere mortals can't stand. These guys ain't in for the music, they are there because it's trendy to listen to music that has yet to achieve mainstream coverage. The minute these pretty boys with manbuns get bored of dudes shouting on microphones while guitar riffs explode in the air, the same minute that they (hipsters) will be leaving to move on to the next jet-setting trend. Hipsters with their undercut hairstyles, mustache handlebars, khaki pants and man bun hairstyles so far have ruined alternative rock, drum and bass, dubstep and now they're on their way to ruin heavy metal. But the good thing is that the consensus back at that festival in Seattle was that hipsters with their long hair in man buns had no place in our scene, so I doubt these guys will last any longer to be able to ruin the scene like they've done with other music genres in the last 3 years.

The man bun hairstyle and hipster beards in the heavy metal scene?

How to have a thicker mustache

There are no comments for this post "The man bun hairstyle and hipster beards in the heavy metal scene?". Be the first to comment...