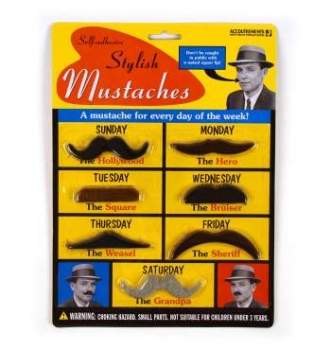 If you're feeling a little post-Halloween depression and no amount of fun-sized chocolate bars will cheer you up, here's something that will: Movember is now upon us! That's right, Stylish mustache.

Movember - that magical month near the end of each year when mustaches sprout and flourish (or attempt to) on the faces of men everywhere, and bring joy to all who surround them. It's like combining all the best holidays, plus your birthday, and making it last a full thirty days. It's that unreal.

But it gets even better. Movember, sometimes called "Novembeard," is actually a charitable endeavor, raising funds and awareness for cancers that affect men. Participants start with a clean-shaven face on November... erm, Movember 1st, and are sponsored by mustache admirers who want to see what they've got, facial-hair-wise. It's your basic win/win situation.

Since we ladies aren't physically able to participate in the growing/cultivating aspect of Movember, we thought it would be fun and pretty much necessary to imagine our favorite fashion figures in some legendary celebrity 'stache styles. Then, with a little photoshop magic, we were able to make these mustache matches a reality. Can you really see Anna Wintour with anything but a pencil-thin mustache? And who would've thought a snowy Fu Manchu would seriously flatter Karl Lagerfeld? Take a look at the rest of our picks, and prepare to be mesmerized by some marvelous mustaches.

Everyone knows that Tyra loves having an audience. This Geraldo Rivera mustache compliments her smize and suits her outgoing and empathetic personality perfectly - both she and the OG (Original Grower) are former talk show hosts!

Ms. Wintour is known to be very particular and organized in all aspects of her life and career - traits reflected in this classic Clark Gable pencil mustache. Trimmed to perfection, with not a follicle out of place - exactly as Anna would like it.

Only Tom Ford could pull off this daring and extraordinarily bushy style and still look fresh as hell. This is what Movember is all about, people.

Carine generally has that smoldering, seductive French thing going on. Tom Selleck seduced Monica Gellar with his mustache. The similarities are endless... a mustache match made in heaven.

Kate Moss and Charlie Chaplin are both originally from London. Crazy, right?? They also both look spectacular with a toothbrush mustache - and as you can tell from this photo, Kate has passed down those impressive mustache genes of hers to daughter Lila Grace. That's one lucky kid.

Kaiser Karl has stuck with the same style for a long time now - maybe a little too long. We suggest he switch up his look a bit with this impressive Hulk Hogan 'stache. It certainly makes a statement and perfectly matches his powdery 'do.

Daphne Guinness is certainly an eccentric when it comes to her fashion choices. Why should her facial hair be any less extreme? This sculptural Salvador Dali look defies the laws of gravity and is as daring as the sky-high shoes Ms. Guinness is known for wearing. Only a true avant-garde can pull this one off.

We admit, it's a bit of a stretch calling Seth Green's ginger mustache legendary, but it might soon be, should Grace decide to grow this style for Movember. It really flatters her face and has a definite cohesion with her signature wild mane. You'd be crazy not to agree.

Finally, we have the glamorous Donatella Versace, who is the chief designer and Vice President of Versace. William Howard Taft was the 27th President of the USA. So they have that presidential connection going on, and the fact that they can also pull off extremely large, graying handlebar mustaches. It's really a shame these two people, with such commonalities, were never able to meet. A crying shame.

There are no comments for this post "When Great Mustaches Happen to Stylish People: We Give Fashion Peeps Movember Makeovers - Fashionista". Be the first to comment...