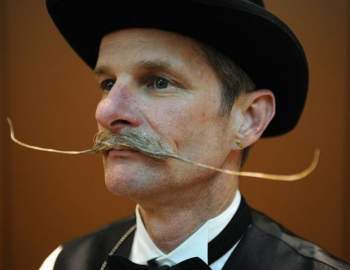 Movember, launched in 2003, is a worldwide movement encouraging men (and women) to grow mustaches in November as a way to raise money for men’s health charities. While Movember has yet to catch on in Beijing, a local variant now in its third year, known as Maovember, has become something of a phenomenon. Through a month-long series of events, Maovember raises money for Orbis, an organization that works to treat blindness in elderly. Last year, donations to Maovember reached 105,000 RMB, enough for 130 patients in China’s rural areas to receive free cataract surgery and the gift of sight. Long mustache.

But despite the success of Maovember, why don't we see more facial fuzz in Beijing?

Beards and mustaches were ubiquitous in imperial times. Literal-minded Confucians considered the body a gift from their ancestors, not to be cut or defiled in any way, including shaving and haircuts. As a result, most scholars in late imperial times had long wispy beards and mustaches grown over a lifetime. But the real golden age for facial hair in China was the May Fourth era. In the 1910s and 1920s, Chinese men from all over the political spectrum grew some crazy mustaches. From today's fashion perspective, the results were...decidedly mixed.

Of slightly later vintage, but how can I leave out the formidable power that is Zhou Enlai’s revolutionary goatee? It looks like he’s wearing Bigfoot’s mirkin. Generations of actors portraying a young Zhou Enlai have had to endure reciting their lines with one of Jeremy Piven’s old toupees glued on their face. An older and more dapper Zhou Enlai finally convinced the Zhongnanhai commissary to issue him a razor and he mostly wore it clean for the rest of his career.

The popularity of mustaches during this period of Chinese history is intimately linked with some of the prevailing trends of the time: foreign imperialism, competing ideas of modernity, and the growing number of young men studying abroad.

Mustaches came (back) into vogue in England and Europe in the 19th century. One theory is that British soldiers serving in South Asia were influenced by some local cultures there which equated facial hair with power and strength. The modern mustache’s next stop was Japan. Young modernizers in the Meiji era grew mustaches in imitation of “foreign” (Read: European) style. Many young Chinese of the May Fourth era studied in Japan, and further afield, and brought the custom home with them when they returned to China.

Eventually the practice faded, and during the Mao era the custom of wearing facial hair became increasingly rare.

While styles may be changing, mustaches and beards still aren’t very common among our Chinese friends and neighbors.

But for those of us who are growing it out a little this month, Maovember 2015 reaches its epic conclusion tomorrow with a Mr. Maovember competition at Home Plate BBQ on Saturday, November 28.** The contest kicks off at 3:00 p.m. and is one of the last few chances this month to show off your ‘stache while contributing to a very worthy cause.

There are no comments for this post "Great Mustaches in Modern Chinese History — Jeremiah Jenne". Be the first to comment...