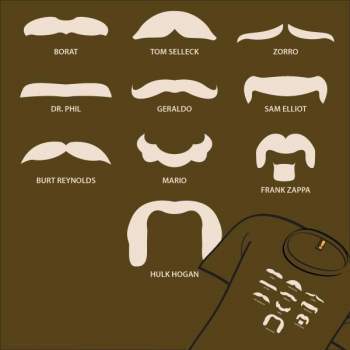 Each November, The Movember & Sons Foundation nurtures thousands of mustaches into fruition on virile faces around the world, and not merely because the upper lip begs to be adorned. Mustache guide.

Movember men, or “Mo Bros,” aren’t just pretty faces. Together with their whiskers, they raise vital awareness and funds for men’s health issues. In 2011 alone, 854,000 dudes raked in $126.3 million for prostate and testicular cancer initiatives, with the added benefit of being encouraged to look like Ron Swanson in the name of Men’s wellness.

The mustache project, which began in Australia will be responsible for close to one million impressionable new ‘staches this year, and the grossing out of women across the planet. For those in the early stages of cultivating a new Mo, there is no shortage of styles to choose from. Options range from pubescent to downright burly. No matter which route you take, the mere notion of having a Mo’ represents a certain je ne sais quoi, a worldliness that can only come from such a noble display of testosterone.

Growing a mustache in meditative peace is nearly impossible. When you have any hint of whiskers growing on your upper lip, other guys with similar facial gilding will want to talk to you about it, share tips, and whip out tins of pomade for you to observe. You’ll unofficially become an esteemed member of the Brotherhood of the Traveling Mustache, and the better educated you are up front, the better your chances of fending off well-meaning amateur barbers and stumping would-be ‘stache shamans. Having a mustache may make you look smart (I’m talking to you, Salma Hayak) but our guide to growing and raising a Mo in these uncertain times will help you play the part, with only a hint of irony.

The Soup Strainer, aka The Painter’s brush: This is the easiest to emulate as it needs the least amount of maintenance, but does require a hearty amount of testosterone and a strong, if not stiff upper lip, as this massive mop can get pretty heavy. Famous faces from Ned Flanders to Yanni have allowed this style to crop up on their faces.

Einstein: A grizzled version of the Soup Strainer that works best when accompanied by an equally frazzled head of hair. It effectively communicates to people that you are simply too brilliant to care, and that you are prone to spells of scoffing and tut-tutting. Opt for this if you are more of a solitary, discoverer type.

Super Mario Bros: Famous plumber and occasional mushroom enthusiast Super Mario and his brother Luigi pair their fierce facial hair with cozy overalls, a feat few men can pull off. Luigi, the slimmer, taller of the two bros, keeps his fluffy mustache neat tidy, while Mario’s is slightly tousled, but both Mo’s surely contribute to the siblings’ success at beating level after level.

The Chevron: Lady-killers like Burt Reynolds and Tom Sellick have adopted this wide, healthy silhouette that all but replaces the need for an upper lip. Keep a straight posture and a devilish glimmer in your eye to make it work.

Burt Reynolds: Something about his mustache says “You can trust me.” Women love this guy. Just make sure you can walk the walk.

The Zorro: Also known as The Pencil, this suggestive, super-skinny stache effectively enhances and highlights the upper lip. It’s a great way for men to wear what is essentially lip liner, and requires a very steady hand and a doctor on call for slip ups.

John Waters: This requires near surgical precision to maintain. Water’s shapes it daily with a regular old Bic and trims wayward hairs with a small nail scissors. Sounds like a lot of work, but any mistakes can be easily corrected with a Sharpie.

The Handlebar and the Fu Manchu: The preferred shape of wrestlers and artists alike, the Handlebar or its slimmer, droopier counterpart, the Fu Manchu, is a challenge to grow and a commitment to maintain. Silhouettes can range from Mr. Manchu’s sad koi to Dali’s curious catfish. Many men (Michael Phelps) have tried and failed. The trick to pulling this look off is being unapologetically manly, and a tiny bit irrational.

Hulk Hogan: Hogan may not have been able to make it work with his wife of twenty years, but he hasn’t wavered in his dedication to his mustache of several decades. It requires constant upkeep to maintain the immaculate shape and symmetry, not to mention near daily dyeing to ensure a uniform shade of whitish blond that is not typically found in nature.

Dali: Basically an upside down, highly styled Fu Manchu. With enough pomade, this look has infinite possibilities, literally: Dali was fond of molding his whiskers into an oblique infinity symbol. It’s also quite useful for spearing things like small flowers or dollar bills.

For further insight, check out Dali’s Mustache, over 120 pages penned by the artist himself and photographed by Philippe Halsman. The book does come with a word to the wise – the back cover reads: WARNING!! THIS BOOK IS PREPOSTEROUS. What they don’t warn you about is the major mustache envy the photographs will inspire.

Keep in mind that if you opt for this unique Mo, it’s nearly impossible not to adopt certain mannerisms to go along with it, up to and including: A haunted look in your eyes; Distracting facial tics accompanied by languid limb movements; dramatic pauses before answering simple questions; and questionable affairs.

Ron Jeremy: Although it’s not immediately obvious, this man does care about his looks – RJ credits his bristly whiskers with making his nose look much smaller. The added creepiness of salt-and-pepper coloring is perhaps the one thing that can make it look more disturbing. Mission accomplished, Ronnie!

Rock Star: Could refer to a variety of shapes and sizes, but the operative words are Sex God.

Lemmy: The style the Motörhead bassist is famous for is technically against the official Movember guidelines, but is still a viable way to manipulate your facial hair and essentially let your chin know it’s no longer welcomed.

Zappa: A slightly retro look, Zappa’s Mo is what you get when you take a classic Soup Strainer and toss in a soul patch in that hard-to-reach chin crevice.

Toothbrush: This half hearted mustache, selected by men as varied as Hitler and Charlie Chaplin, is like a tiny little soap box for your nose to perch upon. It’s a minimal commitment, space wise, but does require daily trimming and shaping.

There are no comments for this post "This Movember, the Ultimate Moustache Style Guide , Bullett Media". Be the first to comment...