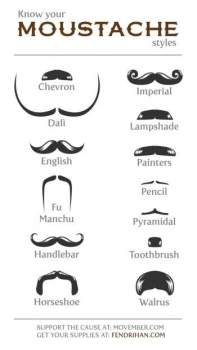 Competitors pose before a beard and moustache competition at the Ecomusee d’Alsace in Ungersheim on April 30, 2017. pic.twitter.com/aCcDYWA4mh Moustache style names.

If you’re curious about the next wave of grooming trends coming to a well-kempt man near you, you could always flip through the pages of GQ. Or, if you’re adventurous, you could look to the International Beard and Moustache Championship. More than 100 of Europe’s most strikingly groomed gents gathered at the Ecomusee d’Alsace in Ungersheim, France April 30 to compete against each other. Even though this gathering is all about facial hair, it was a competitive face-off for the ages. Think of this as the Super Bowl of beard styles.

The photos speak volumes about the degree of skill and dedication of the competitors. In a widely-circulated photograph, an older man in a pink sequined blazer sports what’s known as a Kaiser beard. It’s like a handlebar ‘stache, but it’s supersized and has more than two handles.

In another, an elderly fellow in a dapper gray top hat and matching suit rocks a bright, white mustache that doubles as his sideburns. Another man dons Renaissance-era garb to accentuate his multi-layered mustache, which is a peerless combination of the Kaiser and a goatee.

Rather than declare an overall winner, the beard & mustache championship recognizes several key categories of development. Awards are handed out to the best natural moustache as well as the Dali, English, Imperial and Hungarian moustaches. For the rebels, there’s an award for the best freestyle mustache. This event is all about the mustaches. Thus, entrants are required to shave all hair that grows more than 1.5 cm past the corner of their mouths.

The competition is just as steep when it comes to beard styles. The beard competition takes a similar approach, honoring several categories for both partial and full beards.

It’s clear that this annual grooming showdown is all about diversity in styling, length and combination.

Some of the photo galleries offer a peek backstage, and the scene rivals that of a beauty pageant. Men apply either mustache wax or beard oil to smooth out their whiskers one last time. Some use blow dryers to hold their styling in place. Most of the men are planted in front of a mirror, ensuring every detail is groomed to perfection. A few of the men even partner together to review category requirements and critique each other’s work. They are truly invested in this, and the mustache championship becomes about more than a wild photo opp. It’s a weekend filled with camaraderie and creativity.

During the competition, each competitor is assigned a number and ID badge. They step before the judges one by one for their critiques. Each judge holds up a paddle with a score, on a scale of 1 to 10. Each score is tabulated to determine the winner for the category. The gentleman in the pink sequin jacket performed well during this phase, receiving a slew of 9s and 9.5s.

How to grow curly moustache

There are several beard and moustache championships around the world each year but none capture as much attention and quality as the International Beard and Moustache Championship. When it comes to establishing #beardgoals, it might be time to ditch the Instagram lumberjacks and look to the masters of the trade. These guys know how to work wonders with a drop of beard oil and a dab of wax.

There are no comments for this post "Beard Styles of International Beard Moustache Championships". Be the first to comment...