Mustache for. I moustache you a question: Should Alabama abolish law against fake facial hair in churches? (Kelly Kazek column, photos), 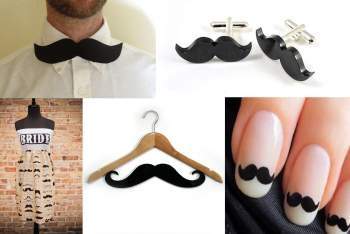 O K, so the headline may be a little misleading. Today’s column isn’t really about abolishing a law against fake facial hair in churches. It’s about rescinding the ban on fake moustaches that cause laughter in church. Wear mustache.

Really, it’s about dumb laws. I just wanted to use the phrase “I moustache you a question” since it began appearing on T-shirts and mugs amid this crazy trend I like to call “Moustache Love.”

Don’t tell me you haven’t noticed: Groups are having moustache-themed fundraisers and parties. Moustache pop culture has become so ubiquitous that people are selling actual moustache pops.

I’m not sure what’s behind the facial hair craze but let me tell you, guys, there’s an art to it. I’ll tell you something else: Those “Duck Dynasty” guys should stick to making duck calls because those scraggly beards are not their finest creations. When I say there’s an art to it, I mean certain men shouldn’t wear certain styles of facial hair. Moustaches without beards are particularly troublesome and most men who attempt 1980s- Magnum-PI end up with Ron Jeremy. Just trim carefully, is all I’m sayin.’

But back to dumb laws. I was Google-hopping one day and my search led me astray, as searches often do, and I found a post from 2013 at petitiononline.com called “Allow Fake Moustaches in Church in Alabama!”

Turns out, there’s an archaic law in our state, according to lawyers.com, that makes it a crime “to wear a fake mustache that causes laughter in church.”

Well, yeah. Anything that causes giggling in church should be outlawed, including certain church-lady hats, snoring and flatulence. But until the law catches up with those things, let’s focus on the facial hair. Although I was unable to determine if the law is actually still in the Code of Alabama, I do know it’s not enforced, at least not until Ron Jeremy visits Alabama, so do we really need it?

Lots of states are revisiting archaic laws, which are kinda fascinating because they tell us one thing: If there’s a law against it, some nimrod actually tried it.

“If an elephant is left tied to a parking meter, the parking fee has to be paid just as it would for a vehicle.” (Florida)

“You may not release gas (fart) in a public place after 6 p.m. on Thursdays.” (Florida)

“It is illegal to sell peanuts after sundown on Wednesday.” (Lee County, Ala.)

“While it is legal to shoot bears, waking a sleeping bear for the purpose of taking a photograph is prohibited.” (Alaska)

I’ve also read you may not have an ice cream cone in your back pocket at any time and boogers may not be flicked into the wind in Alabama.

I know Alabama legislators have a lot to do, what with debating the rightful place of Ten Commandments and all, but perhaps they should revisit some of these. I, for one, think I should have the constitutional right to carry my ice cream cone wherever I want and sometimes, like when I’m painting my nails or texting, my back pocket’s the only place available.

Lawmakers can learn from a recent example in Grand Rapids, Mich., where city officials are expected to vote to rescind a law making it illegal to be willfully annoying. While it may seem a good law on the surface and would protect the city from visits by, say, Miley Cyrus and Justin Bieber, law officers discovered it was difficult to determine who was being “willfully” annoying, except in the cases of Miley Cyrus and Justin Bieber when it’s pretty obvious.

Unless, of course, they come to town wearing fake moustaches and no one notices them.

Kelly Kazek's humor columns appear regularly on al.com and in The Huntsville Times, The Birmingham News and The Press-Register in Mobile. Call her at 256-701-0576 or find her on Facebook.

There are no comments for this post "I moustache you a question: Should Alabama abolish law against fake facial hair in churches? (Kelly Kazek column, photos),". Be the first to comment...