Moustache shape up. Greatest Brewers Mustaches of All Time: #4 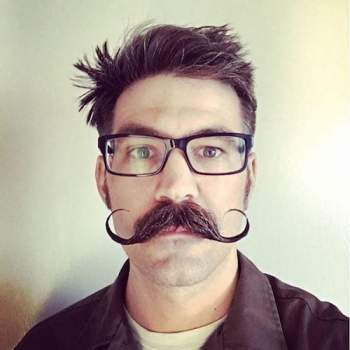 Welcome back for the exciting reveal of the 4th greatest mustache in Brewers history. This was a hotly debated decision. It felt wrong to not have him on the list, but at the same time we felt like his mustache maybe was less important than the man himself. Well, here we go: Unique mustaches.

LO: Colin and Lynda, why do you think Robin is 4th on this list?

LS: I know that originally I had him picked as my #3, but now that I’ve had time to really think on this, I wouldn’t put him higher than #4 (might have even dropped him to #5). To be honest, his mustache isn’t all that special or unique. What makes him deserving of being on the list is that he is an icon when it comes to the Milwaukee Brewers, and his mustache is just part of him. When you think of the Brewers, you think Braun and Fielder (the younger fans), but us older fans think Yount, Molitor, and Fingers (just to name a few). And besides, my mother would be upset if we didn’t include Yount in the top 5 🙂

CB: Mostly because he’s first on every other Brewers List. He has a terrific mustache, there’s no argument there – but he also came from the Golden Era of Mustache History. Sometimes just being good isn’t good enough.

LO : I am with Lynda on this. Colin, would you have put him higher?

CB: As a Brewers fan I’m morally obligated to bring Robin Yount’s name into all “Greatest” discussions. When it comes to mustaches, however, you really just need to act on instincts. You can tell when you see a great one right away, and though Robin’s mustache stands amongst the best, Milwaukee Brewers history still has a few showstopping ‘staches up it’s sleeve.

LO: Fair enough. Yount was unique, he had two mustaches really, the Tom Sellick and then the almost fu manchu (minus the soul patch). Which did you prefer and why?

LS: He did vary his mustache styles as the 80s became the 90s, but I prefer the “Sellick” look as it reminds me of my younger years when my father tried sporting only a mustache (shaved off his beard), and those were good times. For me, other than the goatee, I find the “Sellick” mustache quite sexy. Only my opinion, of course.

CB: With Yount’s facial hair, you really can’t appreciate it until you look at the big picture. His lifetime of mustache work is like a Seurat painting: in small detail you see the effort, craftsmanship and dedication but you need to step back and look at how it all comes together. Robin began his career a clean shaven man, and the mustache grew along with his talents. After it blossomed into Tom Selleck mode, he became one of the preeminent players in the league. Recognizing that his talent – and by extension his mustache – had yet to peak, he grew the staple handlebars that would become an icon of Brewers mustaches for years to come.

LO: Clearly we are all in love with the Tom Selleck stache. I think that it was the definition of Brewers baseball at that time. As the times changed, the stache had to change too. Whic leads me to another question, do you believe that he grew the mustache specifically to stop people from calling him “The Kid”?

CB: I’m not sure if he did it consciously, but it wouldn’t surprise me. Who among us (with the possible exception of Lynda) did not attempt to grow facial hair to show the world that we were, in fact, men? Of course, most young adolescent mustaches look much more wispy and far less well groomed than The Kid’s. Personally, I think his mustache was just a natural extension of his overall manliness. Once you start doing awesome stuff, an awesome mustache is conjured out of thin air and placed upon your face as a mark of a true man.

LS: Whether or not Yount grew the mustache to grow out of “The Kid” nickname, it didn’t work. His generation of fans will always remember Yount as “The Kid”, and no mustache (or age) will change that.

LO: I agree with both of you on this too. As a man who can not grow facial hair, I envy anyone who can. However, a nickname is a nickname and thus can never be un-done. What about the color of his mustache. Do either of you think it was superior based on it’s blazing red color?

CB: Luckily for Robin Yount, he had a natural Auburn hue to his hair. A man with a ginger mustache certainly makes an impression on people. I won’t go as far as to say that it makes his lip sweater superior, but it does speak to the unique individual who crafted said mustache. Robin Yount, like his glorious mustache, is one of a kind.

LO: Well said you two. Ok, final question and then we can shut the book on old #4. Robin’s mustache first appeared under his nostrils during the 1981 season, should we have celebrated his mustaches 30th birthday this past spring?

CB: It occurs to me that during the month of May I spent about 12 days without shaving. This was because I was too lazy to shave at first, then my beard got too unruly to shave with a normal razor. Retroactively, I have named that period the Robin Yount Memorial Facial Hair Festival.

LO: On that note, I think we can put this one in the bag. A handsome mustache that deserves our praise and adoration. Not to mention that the man wearing the mustache we probably the greatest player in this franchises history…so that never hurts. I can’t wait to see what our Stache Specialist has to say about “The Kids” ginger lip accents.

Shawn Anderson is a very good friend of our site. He runs the wildly popular Hall of Very Good and also contributes to The American Mustache Institutes Blog. I have brought him in to be our “Resident Stache Specialist. After each of the top 5 we will get an overview from a man who studies baseball, while admiring face foliage on a regular basis. Who better to share his wisdom with us…

When Robin Yount signed his first Major League Baseball contract in 1973, he was a fresh-faced kid. However, the strong influence of his teammates (most likely Gorman Thomas and Charlie Moore) and the cold breeze sweeping off of Lake Michigan soon taught the young (then) shortstop that he needed to harness the powers of the Gods and sprout some northern mouth fur.

By the end of the 1982 campaign, Yount was the leader of a squad that rivals only the 1972-1974 Oakland Athletics when it comes to teams with labial superiority.

As you well know, the two-time American League MVP was a first ballot inductee into the National Baseball Hall of Fame. Unbeknownst to most…Yount’s plaque serves as a shrine not only to his personal achievement, but also to those of Thomas, Moore, Cecil Cooper, Roy Howell, Larry Hisle, Mike Caldwell and the rest of the “Harvey’s Wallbangers” that showed the world that mustaches could co-exist both on the baseball field and on the leather pants wearing Club 54 dancers.

A special thank you to our wonderful panel, Colin Bennett and Lynda Schneider. Another special thanks goes to Shawn for continuing to bless us with his amazing mustachery. Be sure and check back next week, as we reveal #3 on the list.

You always have the choice to experience our sites without personalized advertising based on your web browsing activity by visiting the DAA’s Consumer Choice page, the NAI's website, and/or the EU online choices page, from each of your browsers or devices. To avoid personalized advertising based on your mobile app activity, you can install the DAA’s AppChoices app here. You can find much more information about your privacy choices in our privacy policy. Even if you choose not to have your activity tracked by third parties for advertising services, you will still see non-personalized ads on our site.

Are mustaches out of style

By clicking continue below and using our sites or applications, you agree that we and our third party advertisers can:

transfer your personal data to the United States or other countries, and

process your personal data to serve you with personalized ads, subject to your choices as described above and in our privacy policy.

There are no comments for this post "Greatest Brewers Mustaches of All Time: #4". Be the first to comment...