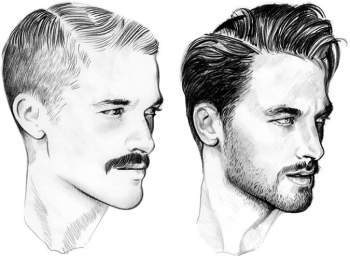 A Century of Men’s Grooming Trends in 90 Seconds

Beard lovers know more than anyone that what goes around, comes around. As times change, one thing’s for sure – beards will always be in style, and so will good beard care. Moustache styles 2016.

To show us just how fleeting contemporary grooming styles can be, WatchCut Video just released a time lapse men’s grooming makeover tracing facial and hair grooming styles from the 1910’s through the 2010’s. Can you guess what the 2010’s guy looks like? We’ll give you a hint – it rhymes with ban mun.

First, check out the whole video here, then we’ll dig in:

Most of the styles came from men’s grooming ads and old commercials.

The video starts off with one of the least likely trends to return – greasy slicked back hair and a handlebar mustache.

Handlebar mustaches are great, but I’m not sure anyone would be able to trust a guy rocking this combo. If I’m wrong, please tell me. Better yet, show me. Let’s see you rocking this slick look and I’ll tell you if I think I could drive away from your car dealership thinking I got a good deal.

Right around this time, men began to shave a little closer because this is when bacteria was first discovered, and beards started to get a bit of a dirty reputation. You’ll see in the video that for several decades, long beards stepped aside to make room for more styled mustaches and clean chins.

This was also the time that the last American president to wear facial hair, William H. Taft, curled up the ends of his famous mustache.

The early aughts signaled the end of a wild time for beards and mustaches, which included mutton chop side burns and the glorious mane-like neckbeard made fashionable by Horace Greeley:

Before World War II started, the toothbrush mustache was all the rage, as demonstrated by Charlie Chaplin and another sorta awful guy you might have heard of, which explains why it went out of fashion just as quickly.

Instead of featuring the Hitler ‘stache, this video chose instead to feature the Clark Gable look, or as some of you may know it better, the George Clooney Dapper Dan look in Oh Brother Where Art Thou.

The hair was more sculpted than slicked back, and the mustache was becoming more thin, quickly approaching the 1940’s pencil look.

The 1950’s was also the first time in the 20th century we see the resurgence of the goatee, which had a few different heydays throughout history. Abraham Lincoln had a goatee in the last few months of his presidency, the Greek demi-god Pan had one, and so did Shakespeare. Possibly the most famous goatee wearer, however, is Satan, which gives the goatee a pretty bad reputation. So it goes.

By the 1970’s, things started to get a little more wild and natural.

In my personal opinion, most beard looks from the 1990’s on up until the present are all still pretty acceptable, especially the Dave Grohl look that’s featured in the video. The exception would be the boy band look, most notably whatever this is, which to me looks a little bit like a thong:

It’s been a loooooong century of majestic beards that are equal parts silly and revolutionary – we’re just glad that beards of all types, old and new, aren’t going anywhere anytime soon.

As a comparison of beard styles throughout the 20th century, check out episode 2 of USA men’s hairstyles, this time focusing on African American grooming trends.

How to shape up mustache

Which era does your look come from? Which out-of-style look is poised for a comeback? (I vote mutton chops). Add more to this story in the comments.

There are no comments for this post "A Century of Men s Grooming Trends in 90 Seconds - Modern Barbarian Beard Co". Be the first to comment...